Epic Ending with a Twist 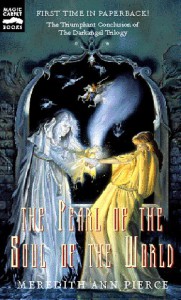 This series has an ending that starts out confusing but the book wraps up the trilogy in such a surprising and refreshing way that leaves most questions answered and explained.

The story raises several questions about the inhabitants of this world and their relation to humans and Earth and it is strongly hinted that this could be an alternate version of our own solar system.

This time, Aeriel has lost all her memories, due to an artifact, which was attached to her skull by one of the White Witch's minions. She travels to NuRavenna where she meets Ravenna, the last of the Ancients. A lot is explained about the origins of the Ancients as well as how the inhabitants of the world came to be.

The book is one of my favorites because it does not tread the tried and true path of young romance and it focuses so much more on the world and its lore as well as Aeriel's path to maturity and responsibility.

My main complaint about this book, is that it ends on a sort of open note; I would have really liked an epilogue, describing how Aeriel continued her journey and what it all led to.

However, there are no annoying, lose ends, just a kind of new beginning that I would have liked to pursue.

I highly recommend this book and actually the entire trilogy to fantasy lovers who want something different and don't mind romantic undertones.